Fuel doctor is a Fuel System Cleaner, Fuel Conditioner and Stabiliser which provides quality assurance for your fuel and protection for your entire fuel system. Initially formulated in 1994, Fuel Doctor has been around for quite some time. In fact it’s still used for its original intended purpose today, to assist in the cleaning of inaccessible underground fuel storage tanks by parent company Fuel Doctors Australia Pty Ltd. And it’s still an Australian Made product, produced right here in Queensland.

Fuel Doctor is a blend of oxygenated solvents and emulsifiers, formulated to disperse and protect against the accumulation of aerobic fungal growths and sulphate-reducing bacteria which thrive in hydrocarbon fuels and their storage systems. Fuel Doctor converts accumulated moisture (condensation), fungal growths, and their excreta into microscopic particles whilst dissolving gums, varnish, and asphaltenes and disperses these throughout the fuel. These contaminants are permanently suspended in the host fuel allowing harmless passage through injection to combustion and exhaust with zero detrimental effects, even to high pressure common rail injection systems, oxygen sensors, and diesel particulate filters.

Fuel Doctor’s state of the art formulation has detergent and viscosity characteristics that improve lubricity, extending pump and injector life. Composed primarily of carbon, oxygen, and hydrogen, Fuel Doctor cannot contribute to airborne pollution and is AdBlue compatible. Oxygenated molecules within Fuel Doctor promote and increase thermal efficiency whilst minimising carbon, soot accumulation, and particulate emissions. Increased filter, pump ,and injector life with enhanced power and economy are the immediate benefits from the use of Fuel Doctor.

Used as a Fuel Stabiliser, Fuel Doctor will stabilise and extend the life of fuel in storage tanks for up to 2 years (petrol) and up to 5 years (diesel). This is in-line or better than many products on the market today that are stand-alone fuel stabilisers.

Most of the fuel additive products currently on the market are hydrocarbon based (kerosene, turpentine, distillate, or petroleum) and add to the problem by feeding the fungus (Cladosporium resinae) that contaminates and grows in fuel. Shockingly up to 80% of service station underground tanks contain some form of contamination and this can be passed into the fuel tanks of vehicles when they fill up their vehicle, especially within the hours following a tanker filling the underground tank.

Fuel Doctor is recommended for use in all diesel, petrol, and two-stroke engines. Instead of using a separate injector cleaner, fuel system cleaner, and fuel conditioner you can use Fuel Doctor which does it all.

Finally, Fuel Doctor is really well supported. Not only do you have our team at Bright Viper to contact with any questions, Fuel Doctors Australia are available on the phone during business hours. For really tricky questions, we go above and beyond as we also have a direct line to Steve ‘The Fuel Doctor’, the owner and developer of Fuel Doctor to get answers to you as quickly as possible.

We truly believe Fuel Doctor is the best product in its class.

Watch a quick version of how Fuel Doctor works on contaminated diesel. 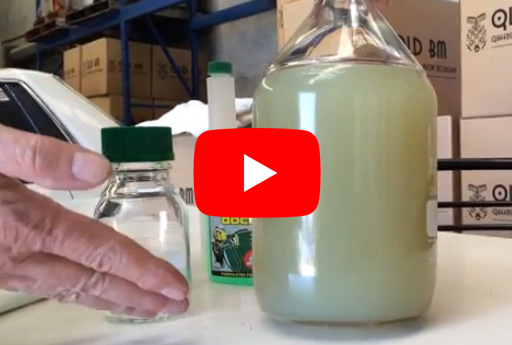 Looking for Trade Deals? Head over to our Trade Page and fill out an enquiry form. One of our sales representatives will be in touch as soon as possible.

If you have a question not covered in our FAQ section, ask us below. One of our representatives will get back to you as soon as possible.

Give your customers the best In-tank Fuel System Cleaner available and prolong the life of their vehicle’s fuel pump, injectors, and other sensitive components. Treat every vehicle with Fuel Doctor, help your customers… and your bottom-line!

All operations are "COVID NORMAL"

To minimise possible spread via our organisation, we have implemented cleaning, distancing and safety measures to help protect both customers and staff.

While we package and ship your Fuel Doctor every day, all shipping and postage services are still seeing reductions in staff and an increased demand for delivery due to Covid-19. All of our shipping partners are still delivering, however the delivery delays we've all experienced are still continuing to some extent. Please use your tracking number and link found on your order information and in your order emails. Should you feel the delay in your delivery is excessive, please contact us.

We apologise for any inconvenience that this may cause, and thank everyone for their support and patience during this time.